Dmitrii Gubarev – the author and the creator of unique musical instrument GUDA – knows firsthand what it means to face people without honor and conscience. This is the story of Dmitrii Gubarev’s interaction with the company “Zen Percussion”, which once densely intertwined in his creative life. But let’s make the facts speak for themselves first.

The history of the creation of the GUDA drums dates back to the already distant 2013 in Svitlovodsk. It was then that Dmitrii Gubarev (who later named the resulting instrument as the abbreviation for his name and surname) created the first, at that time far from perfect, large petal drum with overtones.

After the first publication of the invention, the guys from the company “Zen Percussion” (Kharkov, Ukraine) got acquainted with Dima, who were interested in his developments and offered their help in selling new items on the music market (they already had an established network for selling other instruments at that time). The name of the musical instrument and the logo developed by Dmitry personally are documented and are a registered trademark. Dima has a certificate on his hands, which confirms his copyright and the authenticity of his instruments.

Initial documents on the registration of the GUDA from Dmitrii Gubarev.

nitially, their joint business went well. Dima experimented and created new variations of GUDA instrument, trying out different variations of sound and materials, and the guys from “Zen Percussion” were engaged in the promotion of his developments. After a while they suggested that Dima move closer to them in Kharkov, to organize a workshop there and expand production. Such a turn of events alarmed Dima a little, and he went to Kharkov to establish production with obvious reluctance.

Later, fears were confirmed and it was found out that apart from their main duties related to the sale of GUDA instruments, secretly from Dima, enterprising new Kharkiv partners applied for the international registration of the GUDA trademark on behalf of the German representative of the Red Sphere. And in early 2017 they already received a certificate in 27 countries of the Madrid system, but not in Ukraine, where the instrument was first created and certified. 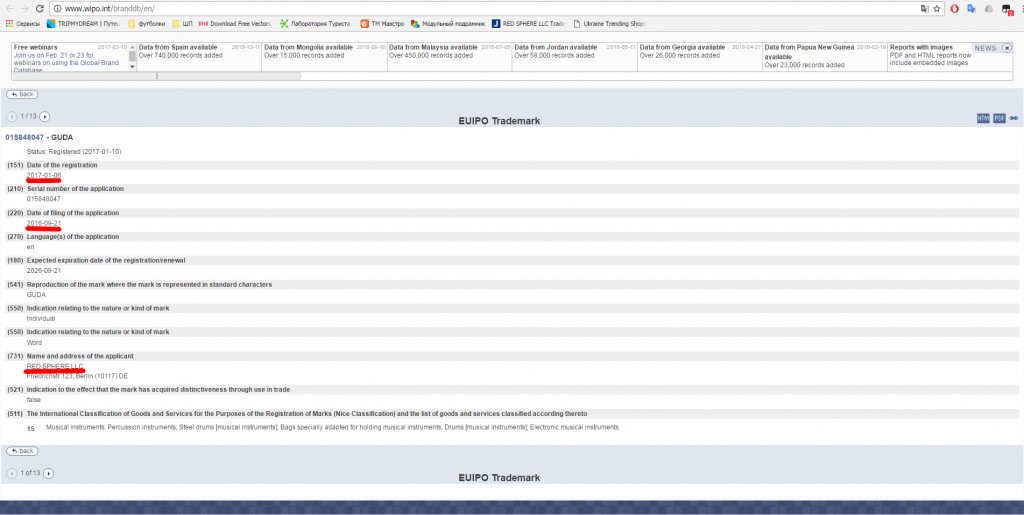 Dmitrii was completely unaware of the behind-the-scenes games of partners and continued his experiments with sound. But during the first month of being side-by-side with “enterprising” businessmen from Zen Percussion, it became clear to Dmitrii that his author’s project was simply being tried to be taken to another hands.

But finally everything got clear to Dmitrii only when without his consent the partners brought him some assistants to the workshop. In addition to that, it was stated, that it would be possible to continue further cooperation only on the conditions that he stops wasting time searching for new musical solutions and fully focuses on the conveyor production of the instrument (production of more instruments of lesser quality as a result) and, what’s more, revealing his technological secrets to unfamiliar apprentices. This option turned out to be unacceptable for Dima, and he ceased cooperation with Kharkiv partners, returned to Svitlovodsk and continued to manufacture and sell the instrument himself.

At that time it turned out that the ground for a split with Dima from the “Zen Percussion” had long been ready. They did not delete the GUDA musical instrument from the list of goods of their store (and site), and also connect all the masters to the process of copying the instrument, thus trying to completely exclude Dmitry from the production chain of the instrument long before the final break with the creator of GUDA. But no matter how hard the Kharkov plagiarists tried to repeat the original sound of Dmitrii`s instrument, they did not succeed. After all, the firm secrets of adjusting the overtones of GUDA have not been opened to them.

Further, since “Zen Percussion” did not succeed to create a big GUDA drum with the proper sounding, for a long time guys from Kharkiv were selling to trusting customers only GUDA DRUM Freesbee. But soon enough the “enterprising craftsmen” found the way out and launched an absolutely new development – the GUDA 2.0 instrument. A new look, a new sound – but in fact only a way how to move away from the need of original tuning as in the original Gubarev’s GUDA drum Standart, which gives a unique sound thanks to perfectly tuned petals that, when touched, produce a tone plus an overtone, usually tuned one octave higher. In the variation of “Zen Percussion”, GUDA 2.0 instrument sounded thanks to two, and not one, petals – but even in this modification the attempt to adjust the overtones failed.

The usage of the GUDA logo by Zen Percussion

Sometimes, when questions from customers about Dmitrii occur, the guys from Zen Percussion answer that they have the right to sell the products of Dmitrii Gubarev according to official papers, but they can not, of course, produce such. After all, there were never any official treaties between them.

All this as a result grew into a kind of information war between both producers, each of which insists on its unique authenticity in the creation of the instrument. All these are only few details of internecine strife, which only outline the general picture of what is happening, it would be possible to list all the nuances for a very, very long time, but we doubt there is sense in this. For those who are curious, there is always the opportunity to complete the puzzle of the facts thanks to the Internet, in our time to do it is not difficult at all, so you can make a conclusion on who is right and who is wrong independently.

As a conclusion I will give just a few more facts

For instance, often there are temporary closing of video channels of both participants of the conflict (one or another) in connection with infringement of copyrights, use of another’s sign and so on. People ultimately do not benefit at all from such a situation, many find it difficult to understand the depth of what is happening, because they only need to buy a solid original instrument, and there is no desire to understand other people’s disassembly. But the aura of GUDA instruments, unfortunately, has been darkened by situations like these and from the need to compare instruments to make sure you buy the original one, from which, alas we cannot escape at the moment .

Howbeit, our world once again stressed its versatility in the issue of vision of justice and proved the rigorous advantage of ambition and assertiveness in comparison with quiet natural talent. Everyone has chosen his own way and goes further as he can. Dima continues to create more and more variations of the instrument with an even more captivating sound, while Kharkiv guys, with their illusive activities, create the vision of developing their own line of instruments.

There has been accumulated а big variety of the GUDA instruments of Dima’s production over the past few years. Comparing the assortment of his products and products made by Zen Percussion, there will no be place for doubts who is the real creator, and who is the parasite on his body.